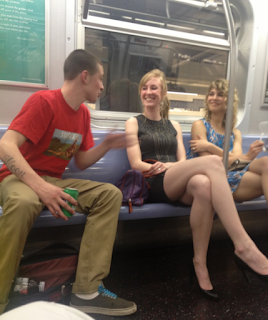 I had just finished my evening swim. Exhausted and famished in equal measure, I sprinted up the stairs at Berri metro station to catch my connecting train home. Just as the sliding doors started closing, I squeezed in and plopped myself down on a chair.

As the train set off, my ears perked up. They had caught pieces of a conversation in German. My eyes scanned the metro and settled on two women across from me. "Und was, wenn der Deutsch spricht?" asked one. The other shrugged. "Ach, fast keiner kann hier Deutsch."

I stifled a smile. Very few people in Montréal speak German, indeed. But some do. My curiosity was piqued, not the least because I had noticed that neither of the two people across from me sounded like a native German speaker. Why, then, would they go to the trouble of speaking a foreign language to each other?

Soon, I noticed that the conversion seemed to be about men. And not any men, but one particular specimen, and his particular attributes. This was going to be interesting. I reached for my water bottle, surreptitiously leaning forward to catch more of the chatter over the din of the 50 year old subway cars.

"He doesn't wear a band or anything" said one. "Don't get too excited now" replied the other, snickering. I paused. It sounded like the man they were talking about was in sight. I looked around the carriage. There were a few mummified creatures in winter parkas with their backs to us, their gender impossible to discern. And to my left, there was a poorly shaven 20-something guy, wearing big headphones and staring at his phone. Other than that, nobody was in sight.

I caught their eyes for a moment, but they flinched and blushed. I turned my gaze to the window and the blackness of the tunnel beyond, noticing my reflection on the glass. They couldn't possibly... no, surely not. And yet, the long-winded German adjectives they used could conceivably be applied to yours truly.

My musings were interrupted by the tinny voice announcing my stop. Just as I got up, I clearly heard "aww... now he's leaving". Now it became almost impossible to contain my laughter. What were the chances?

Before I knew it, the train pulled into the station. And right as I was about to get off, one of the women got up, thrust her business card into my hand and said, in English: "My friend here would like to go on a date with you." At which point I just could not help myself: I smiled before replying in my best Hochdeutsch: "How nice. And I wish you a very pleasant evening."

The doors slid closed behind me, and as I turned around with a massive grin on my face, I was relieved to see that the two friends were almost literally rolling on the floor laughing. They had certainly made my day - and I, presumably, theirs.

Oh, and as for that business card, you wonder? Well, date or not, Sprache verbindet Menschen!