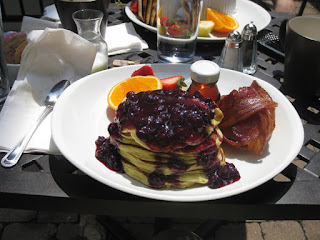 "I'll have to add that to our brunch list" said my colleague. It was Monday morning, we were in the office elevator and I had just told him about this new place out in Montréal's East where I had gone for breakfast. Until this remark, I had not known that people keep brunch lists.

Not that it should have surprised me - Montréal's love affair with this combination of
breakfast and lunch is well documented, there is even a dedicated blog reviewing the scene. The city abounds in places specializing in these meals, which unlike in Europe are not presented as expensive all you can eat buffets, but à la carte at a much more reasonable price. Being affordable, intimate and relaxed, brunches appeal to every social and lingustic class, and weekend traditions wonderfully align around them.

Once you manage to become part of a "brunch gang", you'll be counting the days until it's time again for sleeping in, then getting dressed and leaving your house with an empty stomach, in anticipation of the treat to follow.

Soon after you have met the rest of your gang and conquered a table at the spot of your choice, you will face a choice of omlettes or waffles, french toast or crêpes, scrambled eggs or fruit yogurt. Amidst the incessant chatting on the week's events, you'll decide on sides of toast, bacon or real maple syrup ($2 extra, if you please), and the first of many steamy cups of joe appears in front of you. Being low in taste, but high in caffeine, it keeps fuelling the conversation long after you've eaten through your plate full of carbs and proteins, in whatever form you had ordered them. And this being Québec and not the country south of it, the waiters will keep topping up your cup instead of throwing you out, thus creating this magical opportunity to ease yourself into a very lazy Sunday afternoon without the need to rush someplace else. Typically, it is only when you can't resist nature's call any longer that you will at last leave the table.

As you temporarily disengage from your convives, you notice how the weather outside has changed, the restaurant has emptied and half of the afternoon has already gone. And you feel merry, for yet another Montréal brunch has throughly nourished your body and soul. 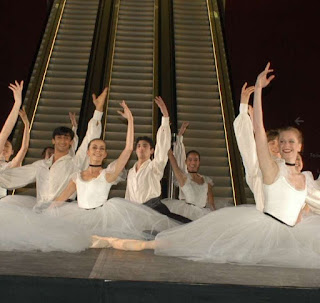 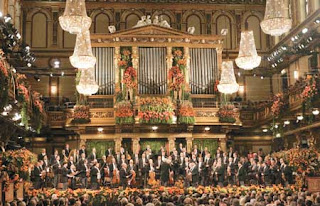 My musically educated convives from the lavish New Year's Eve party scoffed as we tuned into the annual Neujahreskonzert, broadcast live from Vienna during our late breakfast on the first day of 2012. I will admit that the galantry, the exuberance and the rather simplistic waltz tunes may be closer to André Rieu than to the lofty heights of sophisticated classical music. But to the layman typing these lines, there is something soothing and comforting about the Blue Danube and the Radetzky-Marsch with a glass of champagne on January 1st. For as long as I can remember, this is how every new year has started.

Amidst the change all around us (voluntary and involuntary), it is through rituals like this that we strive to retain our balance and bearings. For the commercially secular majority of us, it is arguably the repetitive and reassuring qualities of the holidays that appeal most, and not some obscure religious significance. We could bake cookies any time of the year, light candles all through a long Canadian winter, give gifts on any number of occasions and, really, do without party bombs altogether. And yet, over the past two weeks in Switzerland, I indulged in most everything of the above.

Every year, I tell myself that a deviation from the routine would be nice. And every year, as the family gathers around the Christmas tree and the ever-same videotape (make that a DVD if you're < 20) of drinks, gifts, tree and food starts playing, I cuddle up like with one of these really nice Hudson Bay blankets that I so long to get (hint! hint!). Coming home from overseas, the sensation of familiarity and predictability is a wonderful relaxant.

And so it is that I now head into a new year, full of imponderables, adventures and risks. But I do so with batteries (read: tummy) fully charged, and with faith of the heart. Today, high above the North Atlantic, somebody wil be humming along in three-four time...