You can say you to me 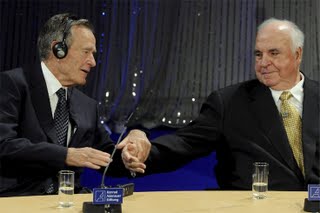 They are admittedly old jokes. Helmut Kohl declaring to US President Bush "you can say you to me", or a terrified French President Mitterrand during a choppy helicopter ride, crying out to Federal Councillor Adolf Ogi "on est perdu!", to which the graduate of Primarschule Kandersteg happily responds "freut mich, ich bin Dölf".

But they do point to a real issue. Both German and French have a formal and an informal style of addressing somebody, the use of which is dictated by complicated implicit social codes. English, on the other hand, has done away with such subtleties a long time ago. This makes introductions and conversations in English much less political, and is probably the reason behind the more casual first name basis so prevalent in English-speaking corporate culture. People brought up amidst the social pitfalls of Goethe's and Voltaire's language revel the liberties of expressing themselves in English.

And then there's crunchtime. In my case, the moment of truth came yesterday, in a most unlikely location: As I was stepping into the changing rooms of my local pool, there were lots of daddies getting their sons dressed (Sunday morning is family time, meaning that by the time I get there in the afternoon, there's even more need for chlorine in the pool). Picking a locker, I exchanged a few English words of courtesy with the mid-forties dad drying off his son there, when I suddenly noticed that he was talking to his toddler in Swiss German. Intrigued, I eavesdropped for a while, but eventually succumbed to the typical expat habit that I had lambasted as annoying and provincial so many times in the past. Still, I just had to out myself as a compatriot!

I made a friendly remark in dialect to the boy, which earned me a blank stare from him but the immediate attention and a smile from his father. "Oh, also Swiss?" he asked. "Yes", was my reply, already noticing the awkwardness of the situation. "Been here for long?" The conversation went on for another two or three pseudo-phrases, with tensions mounting by the second, but let's face it: You can only omit personal pronouns for so long. We had to make a decision: Would we be Sie or Du?

I rescued myself into gesturing at the boy and resorting to the indiscriminate plural Ihr, to which my counterpart flinched and responded with a phrase that started with Sie and ended in Dir. My answer was no less clumsy. We stared at each other for a second, and then simultaneously burst out into laughter. You can say you to me!

P.S. The Economist has recently published a wonderful article on the subject.