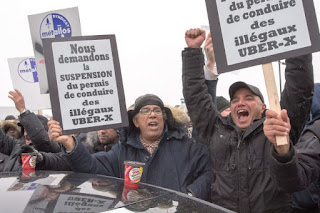 Last week, I met Gustavo, Guy, and Juan. They were friendly, well-behaved and chatty motorists. They work on a golf course, in flooring, or as a musician. And they drove me through the traffic madness of Los Angeles in their clean, modern and in one case even hybrid-powered cars. They stuck to a route dynamically calculated by Google, taking into account current traffic conditions. Gustavo offered me chilled bottled water.

Today, I met Ivan. Or Evo. Or possibly Evan; it's hard to say from the scribble on the paper receipt he handed me at the end of a 20 minute, stop-and-go, round-about slog through Montréal's downtown in his beat-up taxi, whose passenger seat was covered in suspicious stains. While this guy didn't speak a word to his customer, he yapped on his phone non-stop.

Gustavo, Guy and Juan are part-time Uber X drivers. None of them considers driving a taxi to be their life's vocation, but they all told me how they appreciate the ease and flexibility of making a few extra bucks when they want to. They know that at the end of each trip, I will rate them on a 5-point scale, and they clearly make an effort to provide 5 star service. Similarly, they will rate me, giving me an incentive to be just as personable.

Uber has revolutionized the transportation business, and in the process has become the best-funded Sillicon Valley start-up company ever. It smartly connects supply and demand, prices competitively but dynamically, and uses technology and peer reviews to ensure excellent standards of service. It is also very convenient for business travellers: Passengers link their credit card to the app, with trips being billed automatically. Gone is the frantic search for (often foreign) cash, and instead of illegible paper scraps, the company sends perfectly formatted email receipts that can go directly into expense reporting.

One can now hail an Uber in nearly 540 cities around the world, and I have done so in many countries, often grateful for the way in which the app helps overcoming language barriers.

Of course, I also use Uber in Montréal, but not as often as I like to. It is not by choice that I end up in the taxis of Ivan and his ilk, but because of their effots to block the newcomer at every turn. In a typically French attempt to block progress and innovation, and defend entrenched monopolies, taxi drivers have been staging demonstrations, blockades, and even acts of vandalism against UberX vehicles throughout the summer. In none of their arguments did "customer preference" ever matter.

In an effort to find a compromise, Québec's provincial government has now agreed on a 12 month pilot project,  under which UberX becomes more regulated (and more expensive), but is officially sanctioned to operate, although prime spots such as airport pick-ups remain off limits.

The increased paperwork requirements under the deal has led to a - hopefully temporary - drop in UberX drivers active in the city, which is how I ended up in yet another shabby taxi today. But in the longer term, the superior product will likely prevail.

Gustavo, Guy and Juan struggled to believe when I told them of the intimidation and vandalism their peers in Montréal have to deal with. Here's to hoping that even in Québec, Uber's innovative disruptors will soon see the obsolete taxi fleet fade in the rear-view mirror.