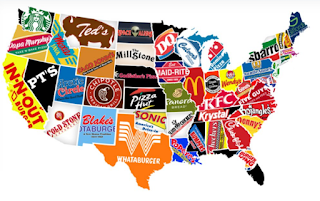 I slept at a Sheraton and a Four Points. I ate at Olive Garden and Panera Bread. I had coffee at Starbucks. I shopped at Walmart and Walgreens. And I bought gas at Exxon.

My recent long weekend in Michigan was entirely free of genuinely local experiences. Or was it?

As a smug European, I used to make fun of cookie-cutter chain outlets covering the United States from coast to coast, much to the delight of its variability-averse inhabitants. Unlike us culturally aware travellers from the old world, I used to think, all the Yankees cared for were perfectly standardized experiences, such as the "Italian" food on offer at over 800 Olive Gardens from Alaska to Florida.

It took me seven years of living in North America to actually visit one of them. As I sat and munched on my "tagliatelle noodles with a creamy alfredo sauce and porcini mushrooms", I contemplated the transition I had undergone to become part of the chain gang.

Some of the attraction lies in the loyalty programs, which everyone from hotels to drug stores has placed in my wallet, capitalizing on personal predilection as much as professional curiosity. Part of it is also sheer laziness: Proximity allows for more frequent, less planned jaunts south of the border, meaning that research into authentic dining spots is often replaced by a quick smartphone search for a familiar name.

Most intriguing, though, is the growing appreciation for the notion that local culture in the US is in fact chain culture. The big brand outlets I visited in the Great Lake State were quite different from the ones I found in California or in Texas. The decor may be identical, but the people are not. The midwest's bumbling-but-friendly residents, with their expansive demeanor and taste for potato, add an unmistakable local accent.

It is in inexpensive franchise outlets that the foreign visitor gets to observe unvarnished society: A group of middle-aged ladies catching up over dinner. A retired couple browsing for garish shower mats and towels at Walmart. Two young activists planning rallies from Plymouth to Pontiac (no, political rallies!) over soup and salad at Panera. A wedding party in cheap suits at the Sheraton, complaining about the flashy relatives from Kentucky. And a waiter at the Four Points taking so much pride in their local brews that she kept bringing pint after pint out to the patio, all while rustling up some coupons to make sure none landed on my tab.

All said and done, I felt like I got a decent taste of Michigan. And as for Canada, I have to confess that we are no strangers to chain culture either, something I was firmly reminded of as I pulled into the Exxon gas station outside Detroit. Adjacent to it was what any Canadian always expects to find there: A Tim Hortons.