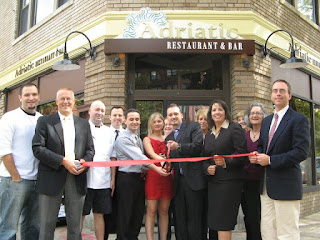 80% die in the first five years, the rule of thumb suggests. Even with its lackluster health system, that mortality rate would be completely unacceptable for Montréalers. It is, however, the harsh reality for the city's restaurants.

Montréal is rightly famous for its vibrant, diverse and passionate dining scene. Even my colleagues in Toronto admitted, on a recent visit, that many of the Queen City's restaurateurs are primarily in it for the money, while apparently their counterparts in Québec seem to genuinely care about food.

They better do, given the realities of running an eatery here: Commercial rents are creeping up, regulations are tedious, produce is expensive, competition is fierce and patrons are notoriously fickle. But - and that is key - urban dwellers in Montréal share their chefs' love for good meals, and spend an above-average amount of their below-average incomes on eating out.

I've seen Montréalers stand in line on freezing cold Sunday mornings in front of the brunch spot du moment,  and accept dinner reservations at half past ten on a weeknight, because that's what we've got, ok?

This phenomenon is strictly urban, though. Take any bridge or tunnel, and you find yourself in a predictable wasteland of bland chain eateries and fried-everything casse-croûtes.  And the affection is fleeting: Much like in fashion, what started as a secret little gem quickly becomes mainstream, with prices rising, service declining and the hip crowd moving on. The high restaurant mortality rate is the result.

Shortly after arriving in the city in 2009, I bought a guidebook to the city's best BYOB restaurants. Leafing through it today, I realize that more than half of the places I tried have since closed. The others tend to be described with the terms "classic", "institution" or "stalwart". It seems, then, that while 80% of restaurants have a boom-and-bust life, a few lucky ones manage to truly entrench themselves.

I like both kinds. And I cherish Montréal's ability to constantly surprise and delight me with new dining choices. It's why I don't live in the suburbs. Or in Toronto.

And now if you'll please excuse me: I've got to go eat while it's hot!