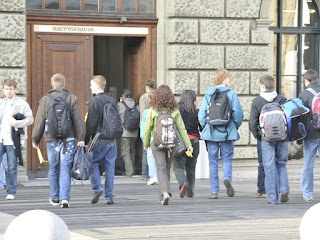 What's in a decade? In early 2002, the Euro entered circulation. The Winter Olympics were held in Salt Lake City. The US invaded Afghanistan. And I graduated from high school. From this perspective, it seems an awfully long time ago.

But in my own perception, it could have been yesterday, so present are the memories of the 6.5 years I had spent at KS Rychenberg. Only in recalling all the things that have happened since do I realize how much my life has changed from the day our headmaster (appearing on stage dressed as a Roman Emperor, no less) handed me that coveted matura degree. It certified me mature enough to ascend to universities and such. Back then, we thought that we would go out and conquer the world. This weekend, time had come to see how we did.

This 10th anniversary saw our class formally get together for the first time, and it was clear that I would not miss the occasion for the world (or, at least, the Atlantic Ocean). As I strolled down Winterthur's high street towards the café we had chosen for apéro, I found myself following a woman pushing a baby buggy. Turns out that this former classmate was not the only one to have progeny - amidst extatic greetings, questions on family life were the frst ones to be asked, and showed the most tangible progress. Two former high school sweethearts had even gotten married to each other just last month.

Transitioning to our dinner venue, we left behind not just a few empty bottles of prosecco, but also the verbal equivalent of swapped business cards. A surgeon and a lawyer, a banker and a theologian, a biologist and a singer, teachers and reportedly even a clown (no, not me!) today look back to the same secondary education. While we had obviously all grown up, the gathering produced an intense flashback.

For soon, we were right back where we had left off a decade ago: Joking, laughing, trading anecdotes, gossiping. It could have been any field trip or camp we'd had. The fact that we had all gathered again seemed to have turned back the hands of time, and I felt merrily immersed in a spirit of youthful camaraderie. Plus ça change, plus c'est pareil, as the French would have it. We were still all the same people, and it felt good.

A friend of mine recently quoted an article claiming that thanks to Facebook, everybody was up to date about everybody anyways, leaving nothing for reunions but bashing old teachers. But the article misses the point. It's not about finding out who's got kids and who makes the most. It's about letting yourself be taken back to a time when life was nothing but possibility, curiosity, and boundless optimism. Turns out matura is the pinnacle of youth.