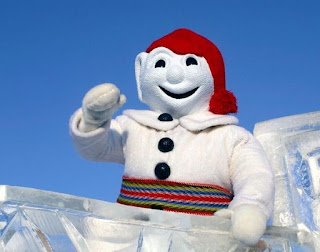 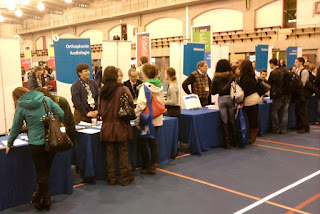 When I first spent time in Montréal, many moons ago, it was under the pretext of a French immersion. To lend credibility to this claim, I attended classes at the Faculté de l'éducation permanente at Université de Montréal, the largest of Montréal's four universities. The month-long course gave me not just a handy degree and a student ID valid for three years (!), but also provided free access to CEPSUM, the university's sports complex. When I returned to Montréal to live here, I was happy to learn that CEPSUM's pool had just been renovated, and have been a regular user since.

Whenever I come to CEPSUM, I feel a bit out of place (even more so than yours truly should at any fitness facility). Straight from the office, dressed in shirt and slacks and looking ever so slightly older than the 60'000 university students who get free access to the complex, I don't quite blend in with the others.

Not that those kids would all look the same. Today, CEPSUM hosted the annual open day for prospective students, and after doing my laps I was lured into the big forum by a charming girl handing me a documentation kit in a nice gift bag (whether she thought that I was a future student or the parent of one will remain her secret). As I roamed among the different stands presenting the various programs offered, it dawned upon me just how big the university really is. From Anthropologie to Urbanisme, virtually every subject can be studied. And as if to confirm every conceivable stereotype, each booth drew its typical crowd:

Black shirts and slim jackets for Architecture, broad shoulders for Kinésiologie, colorful scarves and the latest couture for Littératures de langue française, rugged jeans and flannel shirts for Géographie, turtlenecks and horn-rimmed glasses for Cinéma, and of course the inevitable poor shaves and red eyes for Informatique - I could not hide a smirk, given the scene.

No less interesting than what they wore was which stands the students decided to visit. Long lines formed for Criminologie and Médecine, both offering excellent job perspectives thanks to the Italian mafia in town. A good number of youngsters talked to the representatives for Histoire and Communication - this was the group I would probably best have fitted in with a few years ago, even their sense of fashion seemed palatable. A fistful of particularly daring candidates ventured out to the stalls for Etudes allemandes and that fascinating program with the catchy name Mathématiques, statistique et actuariat. And one lost soul even made it to Théologie et sciences des réligions. Among the abundance of options, which extended to social services, the university radio station and the elite sports team, there was only one booth which remained completely abandoned, both by staff and students. The lone banner for this exotic and entirely revolting subject read: Etudes anglaises.