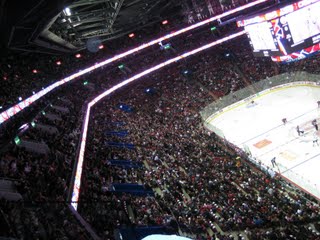 I am not a religious person. But if you live ten minutes' walk from the cathetral of the dominant local cult, you can only resist for so long. And last week, my friend and I finally heard the calling. It went like this: "Go Habs Go!" - And so we went to see the hockey game!

Both of us had been to countless Swiss league hockey games before, and we would consider ourselves a decently loyal and knowledgeable audience. But what we experienced at le Centre Bell was far beyond our considerable expectations. Just like for any other game le Canadien has ever played there, the stadium (the largest in the NHL) was sold out to its 21'273 seats, and the fans of the opposing team could not have amounted to more than a handful. Impressed and enthused, we stopped at the "Habs Zone" gift shop to obtain the obligatory devotionals (ka-ching!) before even making our way high up to the third rank, where I had been able to secure seats on the opening (and sell-out) day for the season last September.

Settling in, it dawned upon us that we were in for an evangelizing experience organized very much top-down. Whereas in Europe, fans stil take it upon themselves to create most of the game's atmosphere by waiving flags, chanting songs or displaying gigantic homemade posters (a specialty of the fanatic fans of my friend's home team), none of this happens at the Bell Center. Here, between gigantic video screens, interactive billboards and elaborately planned, brand-exclusive retail zones, a ruthless commercial machine provides carefully planned entertainment for the masses. And generates the uplift necessary to keep the $44 mio. of salary mass on the ice going. To that end, there are even artificial "commercial breaks" during a game period, so that the TV stations can quickly squeeze in a few clips, while hawkers tout $10 cans of beer at the venue.

Not that anybody seems to mind. When, to the Rolling Stones' "Sympathy for the Devil", the glorious Montreal players are introduced and intermixed with scenes from the club's illustrious past, people get exstatic. The Habs, as they are affectionately known, have celebrated their centennial in 2009; The club is actually older than the NHL itself and has won the Stanley Cup a record 24 times. No other team even comes close. The current roster are household names, and even the finer restaurants in town will have TVs in their dining hall, for when a game is on, nothing else matters.

With a dominance and following like this, the actual performance is secondary. Indeed, in the two matches we saw, the team's display against Tampa Bay and Edmonton was rather lackluster and certainly a far cry from the NHL's finest moments. Fortunately, the opposing forces were not much more inspired either, leading to two more wins for the Habs and enabling the current streak of six victories. As for the two new Swiss Habs converts, we have vowed to faithfully return. Playoffs, here we come!