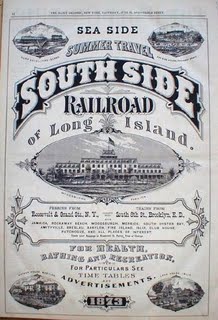 Around this time of the year, as the days get noticeably short and the first snow is only days away (in fact, we were lucky so far in not getting any), Canadians endowed with the necessary means embark on a great traditional voyage: They are heading south, in pursuit of warmer climates and lower prices, which take the sting out of the winter season. With the US Dollar again hovering around parity to the Canadian loonie, it is not just my boss who's scouting foreclosure-scathed states like Arizona, Florida or Texas for investment opportunities. Many Canadians (co-)own timeshares in the States and retreat there November through March, earning themselves the affectionate nickname "snowbirds". (In fact, when I was spending a few days on Florida beaches this time last year, I was amused to hear so much Quebecois around me. Now I know why.)

While admittedly not quite as glamourous, we have moved south this week as well. My team at work, formerly known as "the east wing" for its location, has been relocated two floors up and to the other end of the building. We're not yet across the railroad tracks, but we're bordering them and yes, we're on the south side! Gotta' think of a gang tattoo and special handshake now - although maybe our new neighbors from finance and legal would not appreciate that... :-)

With the excuse of adjusting to the Candian way of life, I've actually taken one of the few trains running on said railway tracks today, and it has whisked me - once again in less time than expected - to the transborder gates at Montreal airport. Forget about the east wing or the West Wing, I am heading south myself. This weekend, it's AC to D.C.!