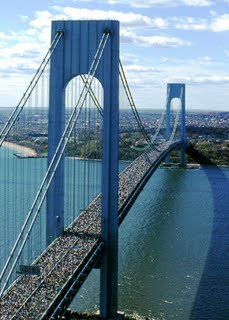 Thanks to the über-sporty personality of my dad, I've had plenty of opportunities in the past to witness large endurance events first hand, including extreme ones such as Powerman or the legendary Trans Swiss Triathlon. They would usually see me spending inordinate amounts of time waiting in obscure locations (school gymnasiums, neighborhood air raid shelters, random stretches of country road), stoically staring past never-ending streams of masochistic athletes, stumbling past me with suffering expressions on their faces while flaunting the latest in high-tech gear. This rather drab experience was interrupted, at unpredictable intervalls, by a flurry of activity as the one athlete with a family connection made an appearance, forcing me to put aside my bratwurst and Rivella, in order to supply him with highly artificial concoctions rich in nutrients enabling continued suffering. It was not great.

So, when heading down to New York last weekend to see said athlete and his no less racy spouse, it was more the welcome family encounter than Sunday's marathon that I was looking forward to. Indeed, the two days of socializing and casual sightseeing were positively wonderful, and well worth the trip (which, on new Star Alliance partner Continental, was much smoother than my ill-fated Philadelphia adventure).

Soaking up the Big Apple's vibes, though, it became clear that the New York Marathon was not your typical fringe event, but very much a proud showcase of this city's amazing diversity. Spectator guides were distributed, and the local media was full of listings of course-side festivities. Intrigued, I set aside my original plans of seeking refuge in a museum, and instead picked two interesting neighborhoods to intercept the runners. My first stop was roughly half-way along the 42km, in South Queens, where the Hispanic and European middle-class residents held bake sales, gallery open days and Halloween recovery parties as 45'000 runners flooded by. Many proudly sported their national colors or advertised a cause ("Survive" seemed not to be good enough).

While the course then led the runners uptown and through the Bronx, I jumped on a Harlem-bound subway train, and emerged around 135th street, in an area where only a few years ago, I would not have dared walking. This time it was fine, but clearly different from Queens. African-American families, still all dressed up on their way home from church, lined 5th Ave, enthusiastically clapping and cheering on the runners, at that point struggling past the 35km mark. Street-side gospel and rap bands performed, and 10 year old junior gangstas in bomber jackets and sneakers offered high-fives to sweaty middle-aged Europeans wheezing by. None of the apathy and boredom of my childhood experiences could be sensed here, and I was almost disappointed when my flock of runners showed up right on schedule - this was actually fun! Not to mention a prime opportunity to shout encouraging stuff at strangers in every language I felt I knew. Most runners smiled back at me, and all of them were too exhausted to mind my botched Swedish / Austrian / Québecois / Castellano...