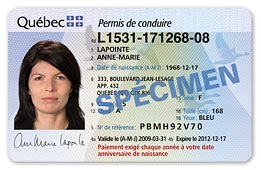 ...has got nothing in common with the SAQ, the provincial liquor store. But if you're seeing double, you should not turn up at either. The société de l'assurance automobile du Québec is the government regulator of things on wheels, and thanks to a fellow expats' heads-up, I decided to pay it a visit. Turns out that when taking up residence in Québec, a foreign-issued drivers licence is only valid for the first ninety days, after which a local licence must be obtained. Learning this, I suddenly experienced, ahem, a sense of urgency and so called the SAAQ yesterday for an appointment. The available time slots were starting in November, with one single alternative. And that alternative saw me getting up very early today.

Wonderfully situated for people without wheels, the SAAQ is located in an outer suburb, in the pleasant vicinity of the Prison de Bordeaux, and can only be reached by a lenghty métro and bus ride. Still, all urban boyscout, I braved it and arrived at the office complex five minutes before my scheduled appointment of 08:20, only to be greeted by a large crowd of people and a very official-looking collection of queues, counters, and demoiselles directing innocent applicants through this maze.

After a surprisingly short wait, I was assigned file number K2 and sent on my way to the official looking into my case. Unhurried though as he was, the fonctionnaire was friendly enough and congratulated me on my nationality. Apparently Switzerland was one of the few countries deemed respectable enough to have its licences accepted for conversion without any extra tests, and the fact that my permit was also in French was much appreciated. ("Ah, vous n'êtes pas allemand!") Unfortunately, I did not yet have a case history of speeding tickets, so the good man had to open a fresh file for me. While typing away, he introduced me to the marvellous features of my all-new, credit card-sized drivers licence sporting the fleur de lys. First of all, its validity is limited to four years (unlike the never expiring Swiss version, which often puzzles American car rental agents), after which I can happily repeat my trip to the suburbs. But not enough, it also comes with an annual fee, currently standing at CAD72 and set to rise. This is neatly broken down into mandatory insurance, taxes on the insurance, fees for collecting the taxes, fees for the provincial treasury to administrate the taxes, fees for taking my picture and printing the licence, taxes on the fees for the picture.... you get the idea. Suffice it to say that my Swiss licence cost CHF40 or so when I got it ten years ago. And nothing since.

However, the Québec licence comes with an extra perk in the form of its very own points program. Earning points is easy: Just go too fast on the freeway, park where you're not supposed to, or commit a hit-and-run (instant elite status!). Points can be earned across Canada, and in many US partner states. Rewards for your points include goodies such as 1-3 month breaks from driving, complimentary secured storage of your vehicle, or even a 2 year all-inclusive stay at the above-mentioned penitentiary. Magnifique!