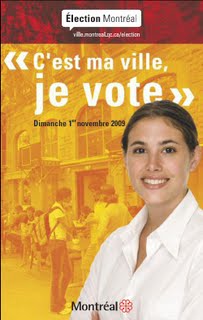 A few days ago, Karim Boulos rang my doorbell, shook my hand and spent a good five minutes talking about himself, the neighborhood and my new hometown. It was only when I told him that I had recently moved from overseas that he became very short-spoken, and quickly said goodbye. Despite never having met Karim before that evening, I had immediately recognized him. This might have had something to do with the fact that his head has been adorning the lampposts and bus shelters in my neighborhood for the past few weeks, promising to "passer à l'action" in order to "get the job done".

Yes, Karim is running for city council in Montréal's election, taking place on November 1st. And unlike in Switzerland, where we tend to vote on everything (minarets, airport approaches, banking secrecy) and anyone all the time, elections still seem to have some novelty value here. Not only to candidates go from door to door personally to talk to voters (but not non-citizens, as it turns out) or send state-funded, multi-page progress reports on their personal achievements in Ottawa. I also received an elaborate, bilingual "instruction manual" on how to cast my vote. Even if I was eligible, this would be a rather cumbersome, manual and physical process involving an on-site visit to join the voters register, followed by another trek to the ballots on actual election day. And all this for a pretty lackluster choice of mayoral candidades, from the incumbent, tainted by a corruption scandal under his watch, to his main séparatiste competitor, who thinks that she need not speak English to head this totally bilingual city.

A funny lot, indeed. And is it really just a coincidence that the election is happening right after Halloween? In any case, my choice of ghoulish costume is clear - I'll go as politician!