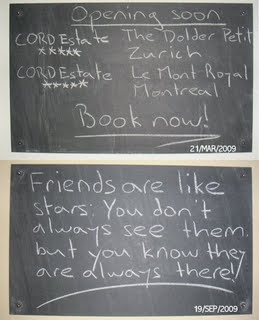 The last party I (co-)hosted took place on the 21st of March at the CORD Estate - The Provincial in Winterthur. The mood on that occasion, while being festive, was also a bit nostalgic, for the event was the closing down of said CORD Estate, and the end of a very enjoyable chapter of my life.

It was high time then to formally open a new chapter, and last Saturday, pretty much half a year later, I finally did so by hosting my housewarming party, or pendaison de crémaillère, at the all new CORD Estate - Le Mont Royal. I wasn't quite sure what, or even whom, to expect, given that most of the people I had invited were really very "new" friends, people I had only met over the last few months here in Montréal. Would people even show up, I wondered while chilling wine and opening family-sized bags of chips and pretzels.

And then they came. Two at first, then some more, then yet even others and others more... friends, friends of friends, colleagues, people I met here and there. Before I knew it, my living room was full of laughter, joy, and spirited, trilingual discussion. Drinks flowed, nibbles were gobbled down, and a merry mood installed itself - most of all probably in myself. How I had missed the social activity, it occured to me, and how grateful I was to feel that yes, there was now a select group of people in Montréal that I had built a rapport with. With the days getting colder and shorter, and my best local friend leaving for a three year sojourn in London tomorrow, this is a very comforting thought.

It was certainly not the last party the Le Mont Royal will see, and my social agenda will be further enriched by good friends from California and Switzerland visiting over the next few weeks (the latter with the distinct honor of testing out my Sweet Swedish Sleeper sofabed...). Me, on the other hand, I'll sink into a Heavenly Bed this weekend, courtesy of a global hotel chain battling the recession. I'll just call it competitive benchmarking!