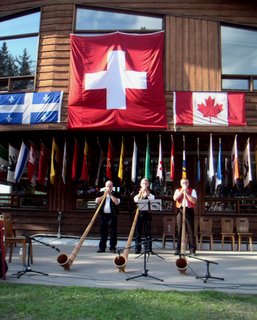 They say it's abroad that you discover your patriotic side. And I now know that that's probably true. Following a mix of curiosity, desire to meet new people and obedience to the Swiss consulate's strong advice, I decided to attend the 1st of August festivities in Mt. Sutton. This quaint little town in Québec's eastern townships has a small ski station and from its setting reminded me very much of Atzmännig or similar places. It did indeed look very much like pre-alpine Switzerland, and the countless Swiss flags decorating the town certainly helped.

For 33 years now, the Swiss community in eastern Canada, some 12'000 people strong, has celebrated the Swiss National Holiday in Sutton, and the event has become the largest of its kind outside our borders. Arriving mid-afternoon, I found myself in almost surreally Swiss settings: A large wooden chalet decorated with flags and geranium, Schwyzerörgeli and Alphorn performances, food stalls selling Crèmeschnitte and sausages (the latter with an enormous, but very orderly line), and all of it populated with hundreds of people wearing Swiss-themed gear. Not too few even donned their traditional folk costumes. I felt woefully underdressed (all I could find was a red-white checkered shirt) and quickly bought a 1. August badge to keep up with Herr & Frau Schweizer.

The crowd was an interesting mix of young and old, farmers and city-dwellers, first and second generation Swiss. All Swiss national languages could be heard (I had a rather hefty attack of homesickness eavesdropping on two families chatting in Ticino dialect), along with plenty of Québecois and English. On the chairlift, I met a guy from Köniz who spends the summer working on a farm here, and we went for a little hike together and then, much like good citizens do, listened to the wise words broadcast from Berne by the President of the Federal Council. And as the clarinet and the Schwyzerörgeli performed the Swiss and Canadian national anthems, with the sun's last rays tinting this pittoresque setting red, everybody seemed truly merry - and strangely united.

It's been a long time since I attended a lampion procession and lighting of the bonfire, but seeing the kids easily transcend language barriers while comparing their little paper lights, and total strangers singing, dancing and toasting in the Festzelt until way after dark, it slowly dawned upon me what the "Idée Suisse" really means: It's the willingness to stick together by celebrating our differences.

P.S. Speaking of Idée Suisse: That other one, the SRG SSR etc., caught me on record.