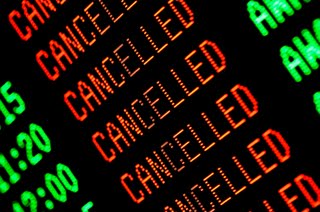 And so when I was dropped off at Montréal airport last Thursday night amidst a downpour, I was full of joy not just about seeing good friends for a weekend in Philadelphia, but also about the upcoming, seemingly easy two flights via Toronto down to Philly. Had I only known that the rain outside wasn't just any shower front, but the low pressure trough created by a major weather system - centered smack over Toronto airport. Its tornados wreaked havoc not just on several GTA neighborhoods, but on YYZ airport operations as well. When, after many delays, I got there by 10pm instead of 8pm, my connecting flight to Philadelphia would have long left - had it not been cancelled anyway. So, along with many other stranded passengers, I spent a night at an airport hotel.

Waking up the next day, to clear blue skies and benign temperatures, I was confident to reach my destination with the 1pm flight I was rebooked onto. But as departure time arrived and went, and I was waiting at the gate with fellow passengers, the gate agent suddenly walked away, and the display monitor changed to "cancelled". Which is never a good sign.

Turns out that the weather system had in the meantime neatly positioned itself between Toronto and the East Coast, and subsequently all remaining flights for the day to destinations between New York and D.C. had been cancelled. "Very sorry Sir", Air Canada said, "we'll put you on the earliest flight on Saturday." This meant another night at an airport hotel, this time a specimen which, like me, had clearly seen better days.

The Saturday flight, third time lucky, then took off on time and brought me safely to Philadelphia, but not before circumnavigating some rather scary-looking thunderstorms on its way. Fortunately, my friends in Philly were all seasoned travellers and were very understanding about my late entree to this supposedly unhurried weekend - which was nonetheless worth the effort!

When on the way back to Montreal, US Airways managed to loose my bag for a day, I couldn't even be bothered to get upset anymore. Yes, air travel had gotten back at me - with a vengeance!

Now, more humble again, I can only hope that my next trip at the end of this week will be smoother. And although I am not travelling on American Airlines, this clip expresses exactly how I feel about it.