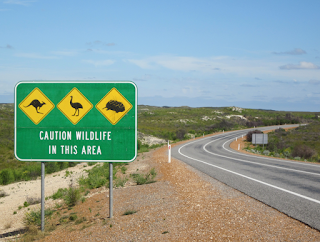 On a sphere, there is only so far you can go before you start getting closer again. The Great Circle Mapper lets you look up the airfield furthest away from any given airport. Feed it Montréal, and it will point to Margaret River in Western Australia.

It may be difficult to believe, but I was really unaware of this when I started planning a trip to precisely that locality almost a year ago. But Australia’s west coast certainly seemed like a good destination to use some frequent flyer miles on. This month, the trip was finally happening.

And quite a trip it was. Not only did I circumnavigate the globe, travelling east across the Atlantic and eventually the Pacific, I also crossed from the northern to the southern hemisphere and back. In doing so, I had hoped to escape the gruelling Canadian winter for some hot and sunny days in a region where sandy beaches seem to outnumber residents 2:1.

Sadly, I arrived in Perth on the eve of what was to be the coldest and wettest February day since records began. Heavy rains and biting breezes were more reminiscent of London than the surfer lifestyle I had come to find. Worse, the cold front was forecast to move south to the vineyards of Margaret River in lockstep with my itinerary.

No, this is not what I had flown this far for. Reluctantly, I jettisoned the planned (and, err, prepaid) excursion and headed north towards sunnier climes instead. This meant a lot of driving – much more than I had expected, and on the wrong side of the road to boot.

Fortunately, both stress and driving rain abated once I cleared greater Perth, and 450km of inland highway now lay between me and Geraldtown, the next major town up the coast. With cruise control set to a comfortable 120 kph, this continent-sized country opened up in front of me, offering first glimpses of its sheer vastness.

Canadians are certainly no strangers to driving long distances, but unless life takes them to the high north, they tend to move inside a relatively densely populated horizontal band along the country’s southern border. Not so in Australia, where outside major urban centers, not much stands in the way of the intrepid traveller.

While I stuck to paved roads, I often came across SUVs four-wheel drives with a spare wheel on the hood and an engine snorkel. Their thick coat of red dirt left no doubt that these features had indeed been used. 36 meter long “road trails”, trucks with multiple trailers, would have posed an entertaining challenge to overtake in an underpowered rental car, had it not been for the empty roads extending straight to the horizon.

Hoping to stay in touch with current events, I tried to tune into local radio stations, which proved virtually impossible in the countryside unless I pushed a button long considered decorative in nature: AM. No satellite radio here, this crackling technology is how the state broadcaster reaches its rural listeners. I half expected the DJ to announce the landing on the moon.

Revealing as the drive was, sitting behind the wheel hour after hour was also tiring. When I finally reached Geraldton, and summery weather with it, the sandy beaches and milky, warm waters provided welcome refreshment. As seems to be the norm down under, the waterfront was lined with cozy bars serving exquisite coffee, and little sun shelters complete with pick-nick tables and barbecues hooked up to city gas. On Friday night, locals pulled up in their pick-up trucks, slung off their flip-flops thongs and paddled their surfboards into the waves, before opening a cool one and flipping a few burgers on the grill.

The next morning, when jetlag brought me back to the beach at an early hour, athletic retirees in their speedos walked past me right into the ocean, where they swum kilometer after kilometer along the shores. Later, teens gathered for a junior triathlon, running right past the finish line to the ice cream stand.

It seemed like an enviable lifestyle to this Süsswasserpirat (no, the Google translation won’t do the term justice) who kept worrying about sharks, jellyfish and dangerous currents on his cautious dips into the water. It felt bucolic, but also isolated: Being a 4,5h drive away from the next, and only, major city, means the people of Geraldton need to be content with what they have.

I, on the other hand, needed to head back before long. For the return, I chose the “scenic tourist drive” winding its way along the shoreline, and it was spectacular. Cruising on an empty road set amidst green hills and sand dunes, with the Indian Ocean a constant companion on the right, made for a lovely summer afternoon. The charms of Australia’s finest AM radio notwithstanding, I opted for my own mp3 collection instead, humming and singing the kilometers away.

Despite stopping for Flat Whites from yet more skilled baristas in yet smaller towns along the way, I made it back to Perth by early evening. On a whim, I headed to the renowned beach of Cottesloe and found a seaside dinner table just in time for sunset.

No, I hadn’t made it to the outback, but I had driven 1000km out and back through this vast country, and I liked it. The waiter suggested a glass of Margaret River white to toast the sunset. And that moment I realized that while I was out this far, I’d have to come back.