This is the log entry I have been wanting to make for so long. It marks the end of a journey that started with a moment as casual as it was memorable. It happened after a dinner at my dad's place, circa 2006. We had sat by the fireplace and talked about plans and goals in life. Time had come to head home, and before leaving I said, on a bit of a whim: "I think I wouldn't mind having a second passport. Perhaps of a place like Canada."

Many things have happened since then. Some were a product of coincidence. Others less so. When I decided to boldly go to this undiscovered country in 2009, I wasn't sure what I'd embarked on.

Over the last six and a half years, loyal readers of the enRoute diary have been able to follow how a voyage into the unknown has played out. What started as an open-minded (and open-ended) mission to discover the new world, and new civilizations, has turned into an enduring form of life in a vast and exciting land.

I had expected to grow tired, or homesick. But I haven't. There were many episodes, and season after season, but I kept going. As time went by, I got more and more attached to the place, and even more so the people I had met along the way. When I was granted Permanent Residence, it started sounding more like a promise than a formality.

Yes, I got lucky. The enterprise I am in allows me to shuttle back and forth across the vast distances separating me from my family frequently, and it also sends me on fascinating away missions every now and then. That certainly helped.

Less tangible, but no less essential, was the fact that from the very first time I set my foot on its soil in 2002, Canada gave me a sense of belonging and peace of mind. It just felt right. Now, this country and I have formalized our commitment. I have sworn an Oath of Citizenship. And Canada has made me one of its own.

It was a formal affair, with flags and anthems and portraits of the Queen, and it was an occasion that made me feel proud. For unlike the lottery of birth, I have not arrived here by mere chance, but by charting my own course, taking decisions and living by their consequences. When the citizenship judge handed it to me, I was happy to pin the maple leaf badge to my chest.

But even more than pride, I feel gratitude toward an exceptionally welcoming Canadian people - a quality even more striking when contrasted with recent xenophobic moves across Europe. As I took hold of my citizenship certificate, Canadian friends sent their warmest congratulations. Colleagues at work hosted a surprise party and inundated me with red-and-white swag (the colors were already familiar, as someone pointed out). She gave me a big hug and produced a tin of home-made maple leaf cookies. It was very touching, and very humbling.

I will end this entry with a video which I have watched time and again over the last six years, and which now stirs even more emotions. And with a remark by a colleague, just as casual and memorable as mine back in 2006:

"So, I have heard you are a new Canadian citizen? That's great! Congratulations... and welcome home." 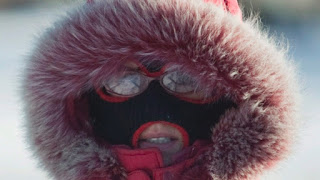 This weekend, we were caught in a polar vortex. This sounds like technobabble from Star Trek and if it was, it would describe environmental conditions not seen on Class M planets. Sadly, in the part of this planet where these lines are written, polar vortexes are all too common.

Since Friday, temperatures have been dropping to around -25C, and with gusty winds the perceived temperature fell to -40C on Saturday. When people talk of a personal low, that's not usually what they mean. I, though, have lived through this new low.

While cold days in Québec winter are not news to the readers of this blog,  a fresh experience can now be added to the warming yarn of vortex survivors: While walking against the wind on Saturday, the water from my eyes froze around my eyelashes, making it almost impossible to keep them open. It was, per se, a rather fascinating phenomenon to experience, although heresay would have been good enough. At least I now understand why some people wear ski goggles when walking their dogs in the vortex. The dogs, in turn, are dressed in no less silly looking coats and boots.

Proper gear, then, is the key to survival in these conditions, when even major cities see temperatures usually reserved for the Arctic. Those Canada Goose jackets, so frequently found in the tropical heat of St. Moritz and Vail, find their true calling here.

Nonetheless, even hardy Canadians can only take so much punishment. On Monday, talk around the office water cooler tea kettle was ripe with tales of cancelled ski lessons, postponed chalet trips and Netflix binge-watching sessions. Not coincidentally, full-page ads for package holidays down south adorned the weekend papers. On the metro, I overheard two passengers compare the respective ills of sunburn and frostbite.

So why was I still out there, frozen eyelashes and all? The polar vortex had perturbed my weekend plans as well. Snowshoeing in the countryside was put off in favor of another indulgent winter activity, whose main component needed to be picked up at Atwater market's fromagerie. This weeked, instead of raquette, I enjoyed raclette!