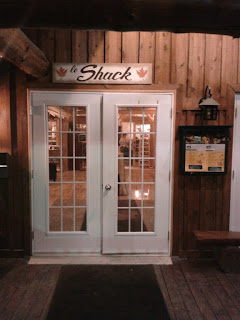 "Never? Not ever??" My friends could hardly believe it when I told them that I had not previously visited one of these veritable Québec institutions. And this despite the fact that their name, cabanes à sucre, sounds like the perfect place for somebody endowed with as big of a sweet tooth as yours truly. So when we planned a Sunday trip into the countryside, my excitement was high - and my blood sugar levels were soon to follow.

Sugar shacks are dotted all over the countryside in the Cantons de l'Est, and they are open for sticky business from February to about the end of April, a period affectionately known as le temps des sucres. It refers to the production time for maple syrup, which is extracted from maple trees as they awaken from their wintry hiatus, and push their sweet sap up the trunk. The trees are carefully tapped, and some of the liquid is funneled into buckets. This tree sap then needs to be concentrated multiple times until it reaches the syrupy state pancake lovers have come to expect. It is this boiling down that has traditionally happened in the little sugar shacks, hidden away in the maple forests.

While some of these cozy places survive to this day, maple syrup has become big business and the shacks have grown into temples of excess, combining their main output with the heartiest, and heart attack-inducing, Québecois foods.

Our destination was a mid-sized venue, without petting zoo or choo-choo train for the little ones, but with a dance hall, syrup boiler, and a dining room easily seating 200 gluttons. The waiters' period costumes couldn't hide the ruthless efficiency with which the place is run. As soon as we were seated, the various dishes making up a typical meal appeared: Pea soup, tourtière, omlette, sausages (in syrup), meatballs (in syrup), cooked ham (with syrup) and creton - pork fat, essentially. And for those whose arteries have not already clogged up, there's the grand prize: The Oreilles de Crisse. They must have been the single-most unhealthy food I have ever eaten: the fatty part of bacon strips, salted and deep-fried in oil. They are, quite literally, to die for.

And then came desert. Sugar pie, little pastries known as nuns' farts (in syrup), pancakes (with syrup), and of course the tire sur la neige, the beautiful practice of pouring freshly cooked hot maple syrup on a board covered with snow, so that you can wrap it around a stick as it starts to harden in the cold. It's finger-lickin' good.

By the time we were done, the sun had long set, but we were so high on fat and sugar that we ran around the playground and went on the swings, laughing mindlessly while burning at least some excess energy before squeezing back into the car, which had mysteriously gotten a lot tighter.

In the long, dark winter months, there were moments when I asked myself why exactly I chose to reside in such a harsh climate. But now that I've come to know the temps des sucres, there is no more doubt: I'll stick to it.