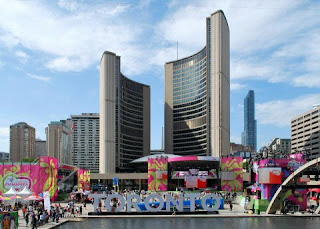 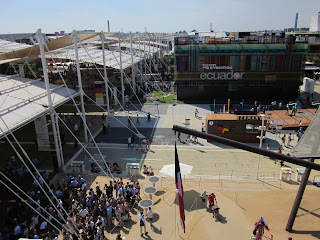 Definitely not politics. Evidently, not efficient administration. And when it comes to the economy, only if you are in the mafia.

It is easy to name things that Italy is not good at. But it is just as easy to name the one thing where the boot-shaped country's supremacy is universally recognized: food.

Very appropriate, then, that "Feeding the planet. Energy for life." is the motto of this year's World's fair taking place in the northern Italian metropolis of Milan. And very obvious that the foodie writing these lines could not miss out on the chance to take a bite out of it.

The only previous Expo I had visited was in Japan,  and it was a futuristic and meticulously organized affair. I was not expecting the same level of professionalism in Italy, and when the delayed train dropped us off at long security check lines, I saw my foreboding confirmed.

But I was wrong: Once through the (very perfunctory Italian) security screening, a beautiful and cleverly designed fairground lay in front of us. Countless country pavilions lined the wide main boulevard, with service areas hosting cafeterias, clean restrooms and free water dispensers dotted throughout. Free wifi was available to those so inclined, and selfie sticks were abundant.

Even more abundant, though, was the manifestation of the fair's motto: food! For participating countries, universal expositions are excellent opportunities to polish their image and showcase their attractions. In the event, all the pavilions first invited visitors to walk through a more or less thoughtful exhibit on the future of food, before inevitably leading them to the meaty part, as it were: the restaurant and shop.

This provided us with the delicious chance to eat our way around the planet in the course of a single day. Starting with an Italian cappucino and croissant in the coffee cluster, accompanied by a little chocolate from the adjacent cocoa cluster, we grazed our way through French bread, Spanish ham, Chinese tea, Turkish hazelnuts, British honey and Chilean empanadas. In the 30 degree heat, we passed on the Swiss fondue and American burgers, and instead returned to Italian gelato in the afternoon, with another espresso shot to keep us awake.

Before we knew it, and sadly, before many of the evening activities kicked off, it was time to head back to the train station. But not before a final stop at the Future Food District, a high-tech supermarket where we stocked up on organic cold cuts, raw milk cheese and whole grain bread for our dinner on the way home.

As the sun set on a long and memorable day, we did not feel much smarter about "Feeding the planet. Energy for life." But we did feel very well fed by the diversity our planet, and Expo, has to offer. And while we were impressed by the culinary exploits of many participating countries, it was the delicious charm and flavor of the hosts' dolce vita that makes us want to come back for seconds. A presto, Eataly!