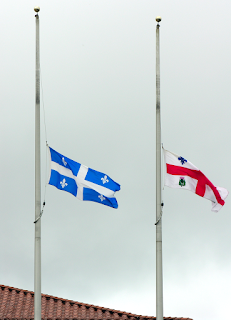 The previous post to this blog was about the importance of timing. It was two weeks ago - and timing was indeed of the essence. For two weeks represent my contractual notice period at work.

After nine years, a big chapter of life will come to a close as I have decided to leave Canada and return to Switzerland. As long as it took to reach this decision, as quickly will it be executed. In just a few days from now, I will be on a plane, and most of my belongings in a container on a boat to Europe.

By extension, this will also mark the imminent conclusion of this blog (although Google will preserve its contents for posterity). What had started soon after my arrival in Montréal nine years ago, at the suggestion of a friend, has evolved into a form of personal diary of this big Canadian adventure. Just like the time in the Great White North itself, it has outlasted my wildest dreams.

Any attempt at a summary of the past nine years would be futile - too rich, too varied, too rewarding has the time been. What remains is an overwhelming sense of gratitude towards this country and its habitants for having welcomed and integrated me the way they did. In fact, they did so to the point of irreversibility: They made me one of their own.

And it is therein that lies hope. For while I have concluded that the next chapter will be written in Europe again, close to friends and family but far away from her, that next chapter need not be the final one. I now have the privilege of returning to Canada whenever I choose. Just as I never thought that I had left Switzerland for good, I don't feel I am leaving Canada forever now.

Nonetheless, there is a strong sense of sadness (or is it nostalgia?) taking hold of me. As if to tease me, the first signs of spring just started emerging after what felt like an eternal winter. I took my first Bixi ride of the season, sat with friends in a sunny backyard, saw the signs for the festivals go up.

My final week is filled with farewell lunches, culminating in my own 5à7 tonight. In the absence of a real family here, the colleagues I worked with closely in these years have become a big part of my life. Them too, I will leave behind. And if I don't feel much remorse for leaving the company, I do so for them.

The new opportunity awaiting me in Zurich is exciting, and while I am not looking forward to the logistics of moving and re-settling in Switzerland, I now have the confidence of having been through worse and prevailing. But I am curious as to how it will feel to come back to a country that will have changed since I left it - as have I.

All of this pales, though, in comparison to the challenge of engaging in a long distance relationship for the foreseeable future. What our industry coldly calls "VFR Traffic" (visiting friends and relatives) will become a vital trans-atlantic lifeline.

Of all good things, this is the one that will not end.

It was 6:01am this morning, and it was pitch black outside. Not because of the early hour, but because the train was in a tunnel. And that was the problem: According to the schedule of the Swiss Federal Railways, this train was meant to arrive at Zurich Airport at 6:01. Instead, it was standing still in the tunnel leading to the airport.

Not a minute later, messages started appearing on the screens in the train, explaining that there was a delay due to "operational reasons". Simultaneously, the conductor came on the tannoy to explain that our arrival would be delayed by a few minutes since a preceding train was still blocking the track at Zurich Airport.

By that time, a lot of huffing and puffing had already ensued with the bleary-eyed commuters around me, with one lady calling someone to explain that she'd miss her connecting bus because that there were "delays again", and that she'd now have to wait another 30min for the next bus.

As she hung up, our train set into motion again. In the end, we arrived at the airport a full five minutes late. I easily made my flight, from which I am writing this now. But to my compatriots, the event surely confirmed their impression of degrading service reliability, and ruined their day early.

Taking the train has been a recurring feature of my most recent trip. Yesterday, I was travelling from Frankfurt to Zurich, using a deeply discounted Sparpreis ticket that restricts users to specific trains - at least in theory. In practice, my first ICE was running over ten minutes late, and when we got to my planned connecting station, I learned that the other train was over 45 minutes behind schedule. The German conductor shrugged and suggested I continue riding the first train all the way to its terminus in the border city of Basel and figure out a way to Zurich from there. By the time we reached Switzerland, station announcements proclaimed that the connecting train had now been cancelled completely. Gone, disappeared, presumably vanished along the tracks with all hands aboard. Die Bahn kommt not, and it didn't much care, either.

The Swiss Railways, on the other hand, immediately mobilized a replacement train from its stand-by reserve in Basel, in order to keep its famed Taktfahrplan intact. This was taken for granted by my connecting countrymen, and we reached Zurich with a delay of a full three minutes. The Germans, including the ICE train staff, were baffled.

Punctuality, then, is as much a cultural as a chronological concept. That in nine years in Canada I have never taken Via Rail already says a lot. But every time I walk across the lobby of Montréal's Gare Centrale on my way to grab lunch, I glance at the big arrivals and departures board hanging from the ceiling. Not only does it show but a handful of trains running all day, inevitably at least half of them also post a delay. And we're not talking five minutes here: Half an hour or more are the norm, with revised arrival times indicated as "estimates". No one seems to mind. "That's just how it is" my colleagues would say. It probably helps that Via Rail's main competitor is an airline that finished dead last in North American punctuality statistics.

The Swiss, then, are both fussy and spoilt with their trains. Yet there is one country that puts Switzerland to shame with its rail performance. That country, to which I had bought a rail pass for this vacation, is of course Japan. In the land of the rising sun, delayed trains would be considered rude and shameful. And therefore, they simply don't seem to exist.

On my entire trip, not one of the many trains departed even a minute late. Whether it was one of the fabled Shinkansen super expresses, or a simple suburban train, they all left smack on time. The entire system is perfectly calibrated for maximum efficiency and reliability, and the Japanese are masters at lining up in the right spots, letting people off first, getting on quickly, and whoosh... we're off.

The latest statistics I found indicate that the average delay for a Shinkansen train was 52 seconds, down from a record 17 seconds in 2007. This is in an island nation with anything from typhoons to blizzards happening, with the occasional earthquake thrown in for good measure. It's mind boggling. Throughout my trip, I saw precisely one sign indicating a delay, prompting instant jokes about that train driver committing seppuku at the end of his shift. Speaking of suicide, urban legend has it that it is dishonorable for Japanese to throw themselves in front of a train during rush hour, since the ensuing delay would inconvenience too many others...

Reflecting on the different perceptions of punctuality will hopefully help me putting things into perspective the next time I find myself on a delayed train. And until then, it will give me new found appreciation for doing things just in time. Or, as they say when the Montréal metro is stuck: D'autres messages suiveront.