Canada and Switzerland are an ocean apart - and exactly one month, when it comes to their national days. The Great White North celebrates confederation on July 1st (1867), whereas Switzerland cherishes August 1st as its - apocryphal - founding moment in 1291.

2016 is the first year I can consider both of these events truly "mine", and it also marks the first time since 2009 that I took part in events for both of them. (Normally, I am on vacation during at least one of the days, but this year I was tied down.)

The Swiss event, the largest such celebration to take place in North America, was held on the last Saturday of July (since August 1 is not a holiday for expats in Canada) and offered the expected mix of folkore, pathos and culinary delights. Unlike the sole other time I drove to the picturesque town of Sutton for it, this year she came along, placing me in the role of a cultural interpreter.  Having to explain traditions such as jodeling and lampion parades forced me to reflect on them, and the way the Swiss observe their national day.

The comparison with Canada Day imposes itself, with memories of it still fresh. Granted, the two were not like for like, as the Swiss festivities were those of a sentimental expat community, and the Canadian ones in Montréal's Old Port arguably these of a sceptical separatist province.

Indeed,  the official act was repeatedly interrupted by loud demonstrators demanding more rights for First Nations people. While the jeering and booing visibly bothered the military band playing O Canada for the flag raising ceremony, the crowd generally chose to politely ignore the protesters, and the local MP addressing the audience ad-libbed a comment about Canada respecting everybody's freedom of speech.

Most striking, though, was what followed next. While the Swiss tradition may be to light a bonfire warning of foreign threats, the Canadians chose to celebrate by making more citizens. Across the country, a cornerstone of National Day proceedings is a special Citizenship Ceremony, where a lucky group of applicants is invited up on stage, and then sworn in to become subjects of Her Majesty in front of an applauding crowd waving Maple Leaf flags (helpfully handed out by government staffers beforehand).

In the inevitable speeches, Swiss politicians love to recall the story of William Tell and how the valiant Eidgenossen have resisted foreign invaders for over 700 years. Their Canadian counterparts invoke a history of immigration and multi-culturalism, and pride themselves in welcoming more people into their fold every year. (Only cynics would note the excellent opportunity to capture new voters before anyone else does.)

It was a touching and appealing message to listen to, and I would hope to hear similar words from podiums on August 1st. For there was a fine irony in hearing the Canadian politician say that the red and white of the Maple Leaf flag should evoke relief and compassion much like the flag of the Red Cross. Which of course was derived from the Swiss flag. 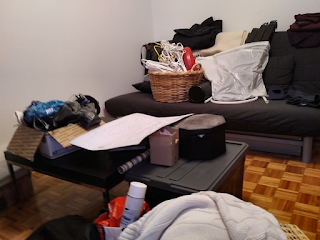