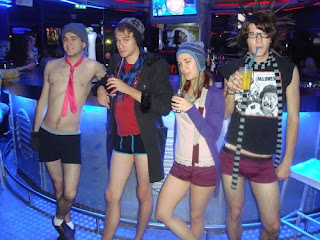 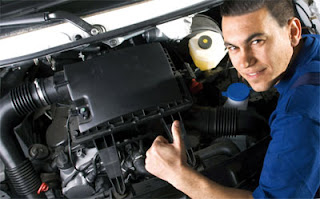 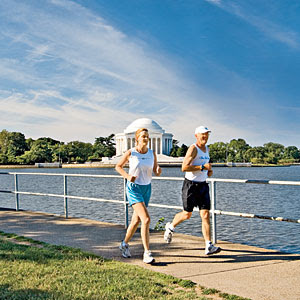 One of the first scenes, in the first episode of TV's polit-drama "The West Wing", shows the US President's spokeswoman, C.J. Cregg, exercising on a treadmill - at 4 o'clock in the morning. "The hour between 4 and 5 belongs to me alone", she pants while running. "This is when I can focus and be myself".

When I watched the show (highly recommended!) in the months before the last US presidential election, I found this particular scene way over the top. Yes, a president's spokewoman must be busy, but surely she would not be getting up an hour early simply to spend it on a treadmill?

Today, I know that I was wrong and the show's creators were right on the mark. While Canadians have cheerfully stuffed their turkeys, I have once again taken the opportunity to spend a 4 day weekend in the US capital, which positively glowed in the soft autumn sunlight and wonderful temperatures around 25C. Conditions, in other words, that prodded the local population to run.

From dawn till dusk, anywhere I went, people of all ages were running past me. Students in Georgetown, diplomats at Dupont Circle, power brokers on the Mall, dog owners on the path along the Potomac - everybody zipped about in a very respectable pace, and sporting gear that makes you believe that they were serious about running. An impression confirmed by a local friend, who's slender despite being from Berne and therefore going about things at a more leisurely speed.

Clearly, Washingtonians are serious about running. Much like they seem to be serious about most things they do. Despite this being a weekend, people of my generation always made a respectable, purposeful impression. Immaculately dressed (anywhere between preppy and business casual, think Banana Republic meets Club Monaco), tapping away on their smartphones and carrying files and folders instead of Wal-Mart bags. On average, they also appeared to be much healthier and more athletic than the typical American - which made them very easy to distinguish from the throngs of tourists queuing up for security screening at the countless attractions.

"Work hard, play hard" is the tune of the town. After it is done with their rigourous exercise routine and merciless work days, the D.C. crowd (especially the subset with corporate credit cards) likes to eat well and have a good time until the wee hours. After enjoying culinary delights around Dupont Circle, my friend took me to the nightlife areas of Adams Morgan and U Street, where I was treated to great live Jazz.

And when it's time to get away from it all, the capital's residents head out to pittoresque Annapolis in the Cheasapeake Bay, where the well-a-do keep their boats and yachts. My visit coincided with the US Boat Show, an excellent opportunity to transport that D.C. competitive spirit ("mine's bigger than yours") onto the waters - the craftsmanship going into these boats were as exquisit as their price tags.

So while the US economy runs up record deficits, the population of its capital seems to merrily run down the soles of their sneakers. As I head back to socialist, but more laid-back Montréal, I can't help but wonder: Are those people all training to eventually run for office? 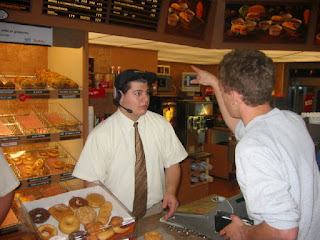 Do you know Aryzta Ltd.? Few have ever heard of this Zurich-based company, despite its €3bn in revenues and €305m operating profit. A good chunk of this profit comes from selling Aryzta products to hungy Canadians in a hurry.

Of course, the Canadians have no idea that they are just sending money down Bahnhofstrasse and into Swiss coffers when they choose to accompany their daily caffeine fix with a muffin, a donut or a cream cheese bagel. No, they think that they are supporting one of the most iconic Canadian brands around: Tim Hortons. Founded in 1964 by a Toronto Maple Leaf hockey player, this chain of coffee and bakery outlets quickly expanded across the Great White North, and today operates more stores in Canada than any other restaurant chain. With 3040 locations across the country (one per 11'000 residents!), you are never far away from a quick sugar rush. That's also true should you be on detachment with the Canadian Armed Forces in Afghanistan - there's a Tim Hortons at that base, too!

In a country of perennial cold, Tim Hortons became famous not for the warm atmosphere of its branches (there isn't any), but for its "always fresh" filter coffee. When I first tried it, I immediately realized why the preferred way to order it was "double double" (that's with 2x milk and 2x sugar for you non-Canadians); This way, the muddy water at least tastes like milk and sugar. But this Espresso-loving European was distinctively unimpressed.

And yet I find myself in line at a Timmy's more often than I care to admit. Blame it on the cheap, extremely sticky and incredibly tempting confections on offer. From nut-and-date muffins to triple chocolate cookies and maple-glazed donuts, I dig them all. Not to mention the sweetest invention since the Schoggistängeli: the Timbit. These little dough balls, essentially the holes stamped out of donuts, maximize the glaze-to-dough ratio and are sold by the dozen. They are wonderful crowd pleasers and have already delighted guests at the opening of the first ever CORD Estate in Switzerland in 2006 (overnight airfreight from Toronto, thank you).

Clearly, none of these treats is good for your waistline - but they seem to be excellent for the bottom line. Which is why on August 12th, Aryzta has ponied up CAD475M to buy the 50% stake Tim Hortons had held in their joint bakery operation, which supplies all the baked goods sold at Tim Hortons stores. The Timbits now come from the same home as the Hiestand croissants so abundant in Switzerland - which clearly makes it my patriotic duty to indulge in them. Talk about a sweet deal!