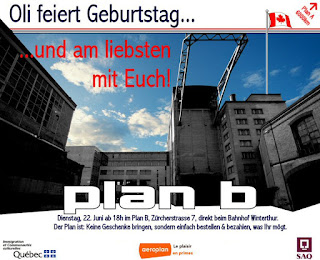 "Swiss time is running out", a line in Deep Purple's smash hit "Smoke on the water" goes. How true. In what seemed like a heartbeat, an intense but throughly enjoyable week in the alpine country has gone by, and I am once again typing this high above the Atlantic (it's LX86 in this direction, if you care to know). Unfortuntely, even the masters of watchmaking can't stop the time from passing, no matter how much one would sometimes like to do that. But by the same token, it won't be too long until my next visit is due. Then, I will be bearing Chirstmas gifts.

If nothing else, a lack of time serves as a great motivator to make the most of the few moments at hand. Which was part of the reason for me to invite my dear friends to a relaxed mini party at a Winterthur lounge bar the night of my birthday. What better way to celebrate than amidst people I hadn't seen in such a long time? That the venue of choice, an old favorite from my student days, is called "Plan B" only seemed appropriate under the circumstances: Not that my guests were B-list, of course. But for all I remain committed to my Plan A in Canada, it seems both fulfilling and reassuring to nurture friendships that are no longer around the corner.

As I've come to realize, time is a key ingredient in growing these social roots. Looking at the merry gathering of friends that night, it occurred to me that they represent the best and dearest of each of the past few "chapters" in my life. Some I've first met as much as 20 years ago, others only just before I left Europe. It's hard to say what exactly made each of them stick to me, but I am very grateful that they did. And I wish I would have had the time to catch up with each of them for hours on end.

Another thought also crossed my mind - and it was no less reassuring than the turnout that night: If it took 15 years to build such a strong and amicable network of friends, isn't it only logical that, after just a bit more than a year in the new world, I should not yet expect the same? Instead, I shall carefully hedge and nourish the sprouts and seedlings that there are - and a full bloom should ensue in time.

Until then, I am happy for Plan A and Plan B to overlap a bit: After taking Montreal friends to Switzerland last winter, Swiss visitors continue to book trips to Canada at an almost monthly interval. Together, they will ensure that this latest chapter in my great adventure is sufficiently intertwined with the preceding ones. And while the ending is still unplanned, I am keen to write the next page. 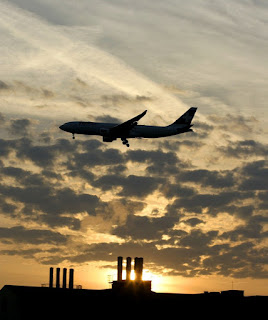 A while ago, film director Marc Forster, of James Bond fame, produced a short feature as part of a PR stunt for Swiss International Air Lines. It was entitled "LX40", after the flight number between Zurich and Los Angeles, Forster's trunk route.

Well, for me it would be LX87. That's the direct flight between Montreal and Zurich, and on its mighty wings I am currently crossing the Atlantic Ocean enRoute ;-) to Switzerland. Homebound, as I am tempted to write - but then again I am not completely certain on which end of LX87 home really is. If home is where your life is happening, where your thoughts, worries and pleasures are most of the time, then I can safely say that I've just taken off from that place. But if home is where your roots are, where everything is intimataly familiar and where you can meet up in a cozy corner with old friends, then I am still 3715km away from the place. And if home is where the heart is? Then let's just say the middle of the Atlantic Ocean feels like a very turbulent and desolate place.

Not that I'd be alone up here, of course. In fact, LX87 is rather crowded once again, which is why Swiss had to change my seat assignment - duly forward. In consequence, I am typing this properly wined and dined, and relaxing in a halfway comfortable space (although, if I were to be picky, I'd complain about the decade-old seat configuration on this particular aircraft). But even if I had a fully flat First Class seat at my disposal (as was the case upon my last renconrtre with LX87), the potential for rest would be limited by my biorythm: LX87 departs Montreal around 5pm local time, and takes about 6.5 hours to reach its destination. In other words, it touches down around midnight Montreal time. Between 6pm and midnight, I am not usually asleep in my own bed, much less so on an airplane - no matter how comfortable the seat.

So I stay awake, only to arrive in Zurich wonderfully tired, merry and ready for my childhood bed. Which would be perfect, if not for a minor detail: At that point, it's 6am in Zurich, and the busy Swiss are up and awake for a new day. But no matter how excited I'll be to have arrived, if there's one thing that I've learned to appreciate in Montreal, it is the beauty of sleeping in and having a leisurely brunch around mid-day. With freshly baked Zopf, hot chocolate and Swiss yogurt, what could be a better way to start a vacation? 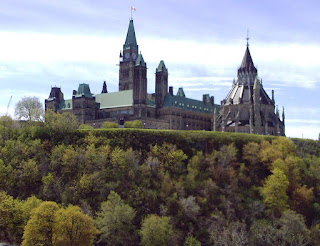